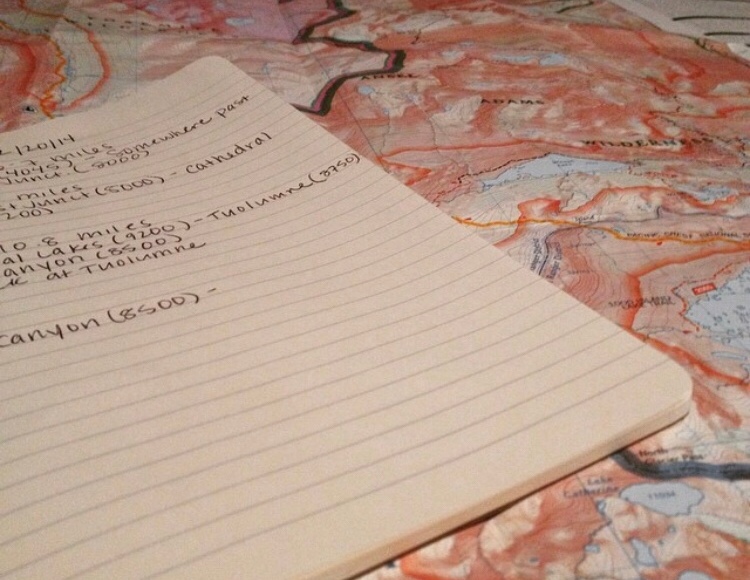 Would it be completely crazy for me to say that my favorite thing about the JMT was planning out the route itself? Yes? Okay, never mind. Forget it. Moving on…

But really! There is absolutely something to be said about creating a route on your own.  Of course, the JMT already is a route, in that it has been an established trail since 1938 (literally what); however, the mechanics that come along with planning 16 night’s worth of backcountry campsites, assessing daily elevation gains and losses, and arranging drop-off and pick-up rides along Highways 395 and 120 was like a game to me.  A very strategic game in which you had to prepare for circumstances changing in the blink of an eye (and oh did they change…).

To prepare for my trip, I used the National Geographic Trails Illustrated Maps.  I know that National Geographic makes a John Muir Trail Topographic Guide, but I wasn’t a huge fan of it.  It is made in booklet form, so each page was only 10ish inches by 4ish inches (a total guesstimate) (okay just looked it up and its 9.25 inches by 4 inches – damn, feeling pretty good about my guesstimate skills!), and I prefer maps that are HUGE.  The three maps that I went with were the Yosemite SE: Ansel Adams Wilderness topographic map, the Mammoth Lakes/Mono Divide topographic map, and the Sequoia Kings Canyon National Parks topographic map.  I also wanted full sizes of each of these maps because I frequent the Eastern Sierras a lot, so I knew that I would get a lot more use out of each of them than just the JMT.  The National Geographic maps are AWESOME, and I would highly recommend them! They are super easy to read, waterproof, and “tear-resistant” (not entirely convinced about that, but I haven’t had any problems with any of them so far!).  If you are in the market for a new map, National Geographic is super on top of their map game.

Okay, as for trip planning, I’m kind of embarrassed to admit what I’m about to say.  Okay, ready, go: I really did not research this trail as much as I should have *shudders*.  My “research” basically consisted of reading daily trail blogs of recent JMTers, and that was mostly because I was so excited that I wanted to read about the emotions of the trail rather than the logistics.  I guess they were kind of helpful, in that they typically included their campsite for the night, so I knew that the “highlights” of campspots, but all in all, I probably should have done a little bit more research logistics-wise.  I mean, it totally all worked out in the end, but I can’t help but laugh when I think of how much research I DIDN’T conduct before embarking on a 17-day backpacking trip.

As for the actual trip planning, it went down a little something like this: on a cold December night, I laid all of my maps out on my floor, sat down in front of the fire, and looked for spots on the map that I was desperate to stop at, and planned my itinerary! Very well-researched and organized, right? Lolllll. 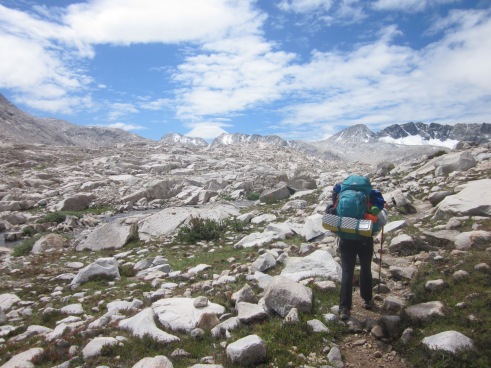 It is literally CRAZY to me that this was our itinerary going into the hike.  SO MANY things changed, and it seems like we actually camped at like three of the campsites that I had pre-planned! Lesson #1 for the JMT: things are going to change. You HAVE to roll with it or you aren’t going to make it.

Our trip itinerary was screwed before we even began the trail.  In a stroke of blessing-in-disguise luck, my hiking partner got a dream job interview in Los Angeles two days before we were going to take off.  Short version of the story: we had met up in Mammoth Lakes three days before our take-off, he received an email from said job THAT NIGHT that they wanted to meet up with him the next day, we drove back down to Los Angeles for then interview and then back up the next day, had one day in Mammoth Lakes to get our permit and finalize our plans, and then started the trail the next day. To add to the chaos, the office wanted a second interview in five days, so we had to break up our trip up to travel back down to Los Angeles for the second interview.  It was seriously chaotic, but it ended up working out really well.  He got the job, and they let him start in two weeks so that we could finish the trail! Thank you, office!

The permit gods did not look kindly upon us, so we didn’t get a permit in advance.  After spending a few hours at the Tuolumne Meadows permit office, we received our permit to head out the next day, but had to start from Tuolumne Meadows.  It was a (slight) bummer not to be able to start from the valley floor, but with the chaos that ensued from the job interview, it actually worked out perfectly, because it shaved off two days of our trip and allowed us to finish at Mt. Whitney three weeks later!

The chaos did not stop there.  On July 4, 2015, the Sierras received a MASSIVE amount of rain, and it pushed us back to a 11am start time.  On July 8, 2015, the Sierras got 5 inches of snow.  It pushed us back a day, and we ended up camping in the same spot that night that we had camped in the night before.  The list goes on and on… Like I said, things are going to change. It’ll suck, but you can make up time. If you can’t roll with the punches, you are going to have some serious problems. 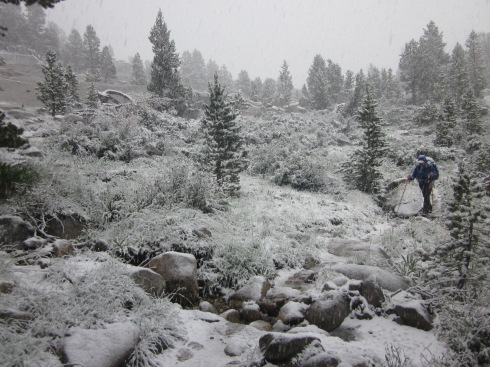 Our schedule ended up going a little something like this (notes for the day included):

If you have any questions whatsoever about the mapping your route for the MT, please comment here or email me at meghikes1@gmail.com! I had quite a few questions that I wish I could have asked somebody, so please don’t be a stranger!

Happy to answer any questions about trails, gear, or preparation for your next trip!

As an Amazon Associate I earn from qualifying purchases.

Shout out to LogoMakr.com for helping me create my sweet logo!